One Day, We Will All Be Programmers

I probably spend more time than I should thinking about the economy. When I do, I often think about what it is most residents of the West do for a living, which I like to call the “economic profile” of the West. (Others call this employment by sector.) I think about how that profile has changed in the last hundred or so years, and about how it might change in my lifetime.

The first revolution of automation, the industrial revolution, had a significant impact on the West’s economic profile. Societies of agricultural workers transformed into societies of manufacturing laborers. After an adjustment period, living conditions improved as manufactured goods became cheaper and machines replaced human labor in the home and the workplace: think cars, dishwashers, food processors, etc.

A second revolution of automation, the computer revolution, has gone through its initial phases and is just entering a second era. In the last 40 years, personal computers and global networks like the Internet and GSM have completely changed communication. What will the next 40 years hold?

We can try to speculate an answer based on current trends. The two most relevant technology trends in the medium term are data mining / statistical analysis and robotics.

Statistical analysis transforms a large set of messy, human-interpreted source data into patterns for categorizing new data. For example, the fraud alert system for a bank will analyze billions of past transactions to determine “red flags” for fraudulent transactions. If a future transaction triggers the right combination of red flags, then that transaction will be marked as potentially fraudulent, and banks often call the cardholder to confirm the charge.

Medicine will be significantly impacted by statistical analysis. For example, interpretation of medical scans is currently done by trained professionals. Much of their work, however, is evaluating routine scans that show nothing — that evaluation is something a computer could do. (Here’s an article describing automated detection of osteoarthiritis in x-ray images of the knee.)

Robotics will significantly reduce the cost of human-like labor. Low-end retail like McDonald’s and Wal-Mart is one obvious example – as soon as we have cheap, reasonably dextrous robots capable of carrying objects around without tripping or hitting things, we’re there. We’re getting closer every year: ASIMO and AnyBots’ QB are just two well-known examples.

Once robotic labor is as dextrous as human labor and less expensive, we won’t need humans to perform unskilled labor like low-end retail and manufacturing. And once statistical analysis is good enough, we won’t need humans to do “pattern matching”: jobs like interpreting medical scans and analyzing companies’ financial statements will be replaced by computer farms doing the most time-consuming work.

Note that “replaced by computers or robots” doesn’t mean that there won’t be any people involved in these jobs. Rather, there will be significantly fewer people and their roles will be different. Consider medical imaging: a human will still need to weigh in on cases where statistical analysis is not enough.

How, then, will the computer revolution change the world’s economic profile? During the industrial revolution, the appearance of new tools of automation demanded workers with the skills to use those tools. The skills required for the computer revolution will involve the use of software and, increasingly, the creation of new software. We’re already flying down this road. One day, we will all be programmers.

So, people sitting in cubicles all day long, writing and running software? Sounds…great… 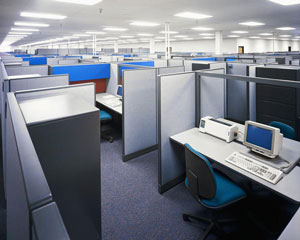 Not most folks’ idea of fun.

The industrial revolution did not just change man’s master from land to machine — it also provided workers with leverage: the ability to produce more per hour than before. This leverage reduced the number of workers needed for the essentials of human life, freeing many to pursue passions in the arts, in scientific research, in sport, and in leisure. (This freedom didn’t come right away, of course, and the adjustment was particularly negative for unskilled laborers!)

Warren Buffet describes money as a claim on the work of others:

The way I see it is that my money represents an enormous number of claim checks on society. It’s like I have these little pieces of paper that I can turn into consumption. If I wanted to, I could hire 10,000 people to do nothing but paint my picture every day for the rest of my life.

We can think of “money” as representing a future human’s time. With leverage, it takes less of a human’s time to produce a given result, and thus it costs less “money”. As more and more work is performed by machines, the cost of performing that work eventually drops to the cost of the energy required to perform that work. And energy is cheaper than people.

At some point in the distant future, when farming and construction are also automated, the “money” cost of food and housing will also drop significantly. (Labor currently makes up about 50% of the cost of food.) Less “work” will be required to afford the necessities of life, freeing up more time for creative pursuits. The adjustment will be tough, but the fruits will be delicious.

Programming is one of the most leveraged skills a human can perform: a programmer can command armies of machines almost as easily as just a single one. A programmer’s skill is generic enough that a good programmer can apply his or her skills and intuitions to web applications, manufacturing, iPhone apps, scientific research, interactive art, robotics and more, with a little research and familiarization work.

Good programmers are already in extremely high demand in San Francisco, New York City, and demand is growing in much of the developed world. As more and more labor is automated, the demand for highly skilled programmers will only increase!